Posted in Visit the center of Trogir 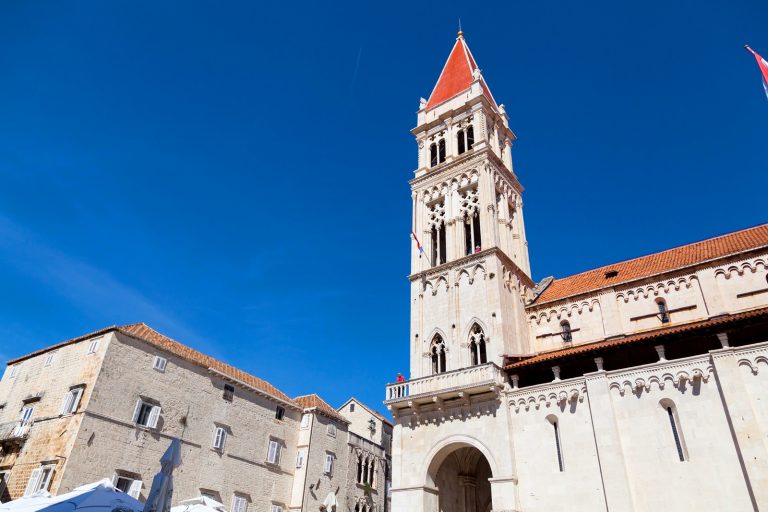 The Cathedral of St. Lawrence (of St. John of Trogir) takes the main place among the Trogir churches. The church area, in which believers gathered from the Middle Ages, is also a building where slogans from Romanticism, Gothics, Renaissance and Baroque mingle and which houses valuable works of art. While in antiquity the cemetery was in the part of the city that is on land, in the Middle Ages burials took place in the Cathedral and in the majority of the churches in the city and its surroundings. The construction of the Cathedral started about 1200 and was completed at the beginning of the 17th century.

Chapel of the blessed Jonh of Trogi

The batismal certificate of the chapel is preserved – an uncommonly detailed contract concerninig the beginning of its construction entered into January 4, 1468, in Trogir, between the master of the fabric of the cathedral, Niccolo Ciprianus, the stone mason Andrija Alesi and Koriolan Cipiko, who had a power of attorney from sculptor Niccolo di Giovanni of Florence and Ivan Duknovic, and four statues of Alessandro Vittoria were also carved for it (later moved to the attic of the bell tower after Baroque modifications, when four windows were opened up at the places of the original niches with statues). The initiator of the plan and the construction of the chapel was Koriolan Cipiko. The chapel, however, from the point of view of sculptures, is primarly the work of Niccolo di Giovanni, a pupil of Donatello.

In the gallery of statues in the chapel, Duknovic's masterpiece of ca 1482 stands out – St John the Evangelist, a statue (second from the entrance on the left hand side) that under the toga of the saint hides the figure of Alvise, son of Koriolan Cipiko, raised to eminence by his poetic fame and honours of a prelate. To the left is a statue of St Thomas, also a work by Duknovic, but one of the last (1508). Among the works of Niccolo di Giovanni and his workshop, the finest are St John the Evangelist and St Paul in the zone of apostles, the Coronation of the Virgin in the lunette below the ceiling – with a gallery of angelic childlike faces, as well as a sequence of putti that symbolically bear the weight of the cornice, standing on the pilasters between the niches for the apostles, and in the ground floor a sequence of putti with torches, symbols of eternal life. The bust of the Creation in a medallion in the middle of vault is a Baroque facsimile of that of Niccolo (damaged and now in the Lapidarium of the municipal museum), the work of Ignacije Macanović of 1778. In its first two centuries the chapel was the mausoleum of Bishop Jacopo Turlon and the chapel of the holy sacrament, for the body of the Blessed Johnwas moved to the chapel only in 1681. when a Gothic sarcophagus was brought into the Renaissaince chapel, and Baroque angles placed by it.